Germany has a strong economy and high levels of financial inclusion, despite German consumers having a strong inclination towards cash for the majority of transactions. The German maxim is “geld stinkt nicht” (literally “money doesn’t stink”) – consumers still consider cash the best available option due to a combination of ingrained consumer habits and a cultural preference for spending within one’s means.

While in terms of number of cards in circulation the German payment card market is third-largest among its peer, behind only the US and the UK, it is still far from being recognized as a fully mature market. The average number of monthly card transactions by consumers in Germany was 2.4 in 2017, much lower than the likes of France (12.4), Canada (9.0), and the UK (7.7).

Payment cards are used sparingly at the POS, with their primary use being to withdraw cash from ATMs. As a result, alternative payment methods are sharply limited in both usage and consumer interest. The only major area of the German payments market in which alternative and emerging payment tools have gained any sort of traction is the e-commerce space.

German consumers use debit cards for most transactions. National debit card scheme Girocard is the most frequently used payment card. Payment guarantees to retailers by all participating banks make Girocard popular among retailers. Until a cap implemented by the EU in 2015, its lower interchange fees compared to international schemes gave it an edge over other scheme providers. So far, the new interchange fee rules have had a minimal impact on its dominance in Germany.

Pay-later cards are not very popular in Germany mainly due to a cultural aversion to debt. Credit cards represent only 2.1% and 1.4% in terms of card transaction volume and value respectively in 2017. Almost 70% of the credit card holders paid off their balances in full each month. The opportunity for credit card revenue in Germany is thus sharply limited, and there would need to be a seismic shift in the German attitudes towards debt to change this. 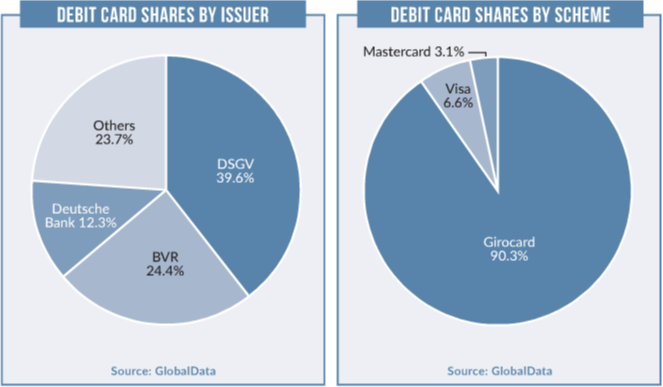 E-commerce growth is accelerating the acceptance of alternative payment tool

Germany is the third-largest e-commerce market in Europe behind only the UK (€175.6bn) and France (€81.1bn), although its population is much larger than either of those countries. This highlights that Germans are not nearly as engaged with the online channel as French or British consumers. Growth of e-commerce in Germany has been facilitated by high internet and smartphone penetration and the availability of fast broadband connections.

The use of video and social media to enhance product presentation and services in e-commerce is further fueling growth. Compared to other European markets, payment cards are used infrequently, while online payment tools that hide the user’s payment details from the merchant (such as SOFORT and PayPal) are more popular, driven by German consumers’ perception of these tool as both convenient and secure.

Germany is working towards the adoption of instant payments

In November 2017, the European Payments Council launched a pan-European instant credit transfer scheme. SCT Inst will enable individuals to transfer a maximum of €15,000 ($15,783.80) within 10 seconds. Funds can be transferred instantly 24 hours a day, seven days a week, 365 days a year across all 34 SEPA countries. To roll out a real-time payment method in Germany alongside SCT Inst, UniCredit started testing its real-time payment platform in July 2017.

At present, approximately 600 payment service providers (PSPs) from eight countries – Austria, Estonia, Germany, Spain, Italy, Latvia, Lithuania, and the Netherlands – rolled out SCT Inst on November 21, 2017. More PSPs from countries such as Belgium, Finland, Germany, Portugal, the Netherlands, Malta, and Sweden are anticipated to introduce SCT Inst in 2018 and 2019. 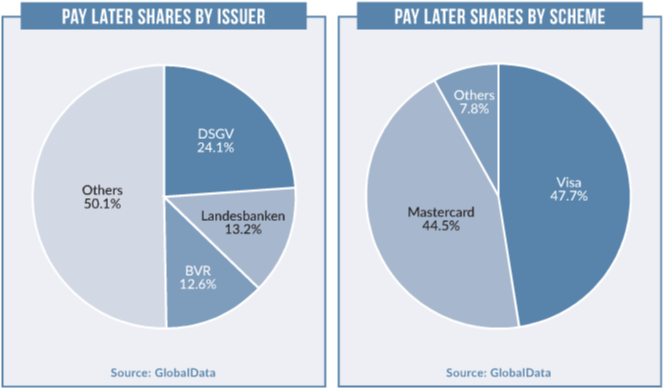 The prepaid card market registered a decline both in terms of number of cards in circulation and transaction value during the review period. This was primarily because credit cooperatives stopped issuing Girocards with GeldKarte (contact-based) functionality, and also replaced expired cards without GeldKarte.

Girocards from local card schemes are also available in the form of prepaid cards in Germany. These are available in two variants: GeldKarte (contact-based) and girogo (contactless). A maximum of €200 can be loaded on to prepaid cards at any one time.

A GeldKarte card is a rechargeable prepaid card that can be used to make payments online and at more than 420,000 GeldKarte POS terminals in Germany. The card can be also used to pay for parking tickets, public transport, and tourist attractions.