Germany has a strong economy and high levels of financial inclusion, despite consumers having a strong inclination towards cash for retail payments.

In line with the German maxim of ‘geld stinkt nicht’ (‘money does not stink’), consumers still consider cash to the best available option, due to a combination of ingrained habits and cultural preference for spending within one’s means.

In terms of the number of cards in circulation, the German payment card market is the third-largest among its peers, behind only the US and the UK; however, it remains far from being recognised as a fully mature market.

Rising adoption of contactless cards, the emergence of digital-only banks, and e-commerce growth are expected to boost electronic payments over the four-year period to 2023.

Until a cap implemented by the EU in 2015, its low interchange fees compared to international schemes gave it a significant edge in the market – and the new fee rules have had little impact on its dominance.

In order to offer enhanced convenience to users, girocards are now equipped with contactless functionality, enabling holders to make payments of up to €25 ($28.64) without having to enter a PIN. In the first half of 2019, over a fifth of transactions made using girocards were contactless.

Credit and charge cards are not very popular in Germany, mainly due to the cultural aversion towards debt. Germans prefer the use of charge cards compared to credit cards, in order to benefit from interest-free credit periods without falling into longer-term debt.

The ready availability of overdraft facilities also tempers demand for credit cards. As a result, these cards accounted for only 19.9% and 17.7% of overall payment card transaction volume and value respectively in 2019. The opportunity for credit card revenue in Germany is, therefore, very limited, and there would need to be a seismic shift in consumer attitudes towards debt to change this.

The German e-commerce market grew in value from $68.6bn in 2015 to $102.6bn in 2019, supported by technological advancements and rising internet penetration. German consumers tend to prefer click-and-collect options when shopping online, primarily due to lower-cost or free shipping, pick-up flexibility, and an easy returns process.

PayPal is the most popular online payment method among Germans, followed by credit cards and bank transfers. The growing popularity of online shopping events such as Black Friday, Cyber Monday and Singles’ Day has also driven e-commerce’s expansion.

The number of ATMs decreased marginally over the four years to 2019, recording a CAGR of -0.3%. The decline was primarily due to the closure of bank branches as a result of increasing use of online banking services.

To avoid physical POS set-up costs for merchants, in May 2019 Volksbanken Raiffeisenbanken launched the VR Pay Me app, which enables merchants to accept payments with smartphones. 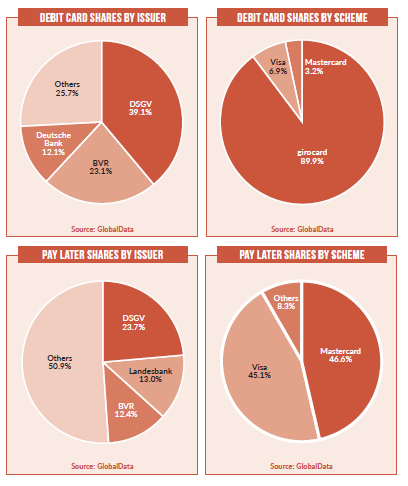