Cash remains the predominant payment instrument in Indonesia – especially among the rural population – accounting for 98.4% of the total volume of payments in 2017. This was primarily due to low awareness of electronic payments, a high unbanked population, and limited access to banking infrastructure.  The modernisation of the country’s payments infrastructure with the introduction of the National Payments Plan, the transformation of cards to incorporate EMV technology, and the National Non-Cash Movement will support the transition to non-cash payments.

The government along with the central bank is aiming to further develop the electronic payment system in the country, with initiatives such as support for the development of a national shared ATM network and allowing foreign investments in the e-commerce sector. As the government and banks have taken various such initiatives, payment cards will grow steadily over the next few years and will gradually become more accepted.

Debit cards remain the preferred payment cards among Indonesian consumers. However, usage is mostly restricted to ATM cash withdrawals, with frequency of use at 9 times that of POS transactions. This is primarily because both consumers and merchants still prefer the use of cash. However, with ongoing efforts by the government to enhance the POS infrastructure and card acceptance, the number of POS transactions has increased.

However, there is still a long way to go for cards to reach truly regular usage levels, with the average card expected to be used only once every three months by 2021. 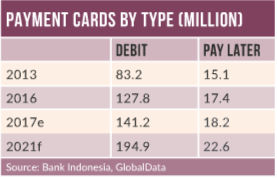 Strict government regulation with regard to credit card eligibility remains one of the major reasons for the low penetration. Mounting card debt among consumers forced the central bank to introduce a regulation, effective since January 2015, according to which individuals with an annual income of less than IDR3m ($222) are prohibited from possessing credit cards.