The French payments market is mature and highly competitive, with the highest average annual spend per card in 2019 among peers including the UK, the US, Germany, Italy, Spain and Canada.

Debit and charge cards are preferred over credit cards due to the debt-averse nature of French consumers. Many are still frequent users of cash, but those who do possess cards – particularly debit and deferred debit cards – use them frequently at the POS.

France has a highly developed POS infrastructure, with a high overall number of POS terminals and a large proportion of contactless-compatible terminals, driven in part by government initiatives.

A notable feature of the French payment card market is the availability of multifunction cards, whereby a single card is integrated with more than one function, providing access to several accounts; the most popular combination is credit and charge card facilities.

Rising adoption of contactless technology, growth in e-commerce, and the launch of digital-only banks are expected to further boost electronic payments in France.

CB cards were accepted by over 1.7 million merchants and at around 54,000 ATMs in 2018. CB also supports digital wallets such as Apple Pay, allowing holders to make payments with a mobile phone. In July 2019, CB introduced FAST’R by CB, an online payment service that complies with the international 3D-Secure EMV standard.

Charge cards are preferred over credit cards, accounting for 65.3% of the total credit and charge card payment value in 2019. Credit card use is low in France, due to cultural preferences and stringent application procedures.

The availability of private credit cards also poses a challenge to traditional credit cards, as they have less-stringent qualification requirements and offer attractive loyalty benefits. However, with issuers offering various incentives, credit cards registered higher growth rates in terms of payments volume and value at respective CAGRs of 19.8% and 16.5%, compared to other cards.

In March 2018, Wordline collaborated with Visa to launch an open payment solution for public transport in the city of Dijon. The solution enables individuals to pay fares with contactless payment cards.

Many prepaid card issuers are offering customised cards. For travellers, Banque Palatine launched the Mastercard Palatine First in July 2018. This multicurrency prepaid card supports payments in US, Australian and Canadian dollars, as well as euros, sterling and Swiss francs.

For online shoppers, Skrill offers a Mastercard virtual prepaid card that can be generated within the Skrill wallet app. The card can be used to make online purchases wherever Mastercard is accepted, up to the balance that is available in the user’s Skrill account.

The French e-commerce market is highly developed, and is the fifth-largest globally in terms of transaction value, behind only China, the US, the UK and Japan. High internet and smartphone penetration, improved infrastructure, and rising consumer confidence in online transactions have driven e-commerce growth.

With the growing number of online shoppers, many retailers are launching online shops in France. 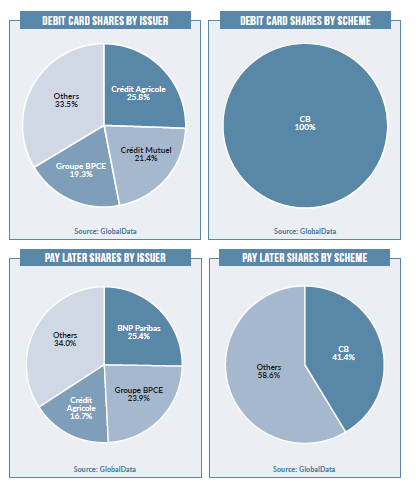