In 2018, low value deals of less than or equal to $10m formed the majority of venture capital (VC) investments in the payment tech space in terms of volume.

GlobalData research revealed that the total number of VC deals carrying value up to $10m had 57% share in the payment tech deal volume.

GlobalData’s analysis indicates that the majority of deals were in the deal value range of $1m-$5m during the year. Furthermore, the maximum number of deals across all the four quarters was also this deal value range.

The first quarter of 2018 recorded 55 deals with a total deal value of $1bn. Around 65% of the deals were less than or equivalent to the value of $10m during this period. Furthermore, only two deals valued higher than $100m.

In the quarter, the top 20 deals comprised 88% of the total deal value.

Although deal volume shrunk by 20% in the second quarter, the total deal value increased to $15.5bn due to the $14bn funding raised by the Chinese payments major Ant Financial. The quarter had seen all other deals worth less than $500m with 22 deals valued at less than or equivalent to the $10m.

Deal volume saw a recovery and grew in the last two quarters of 2018.

Overall, the fourth quarter saw the maximum number of deals; 88 deals were announced with an average disclosed deal size of $23.8m. Around 60% of the deals carried value less than or equivalent to $10m in this quarter. With seven deals valued over $100m, the top 20 deals comprised 80% of total deal value during the period. 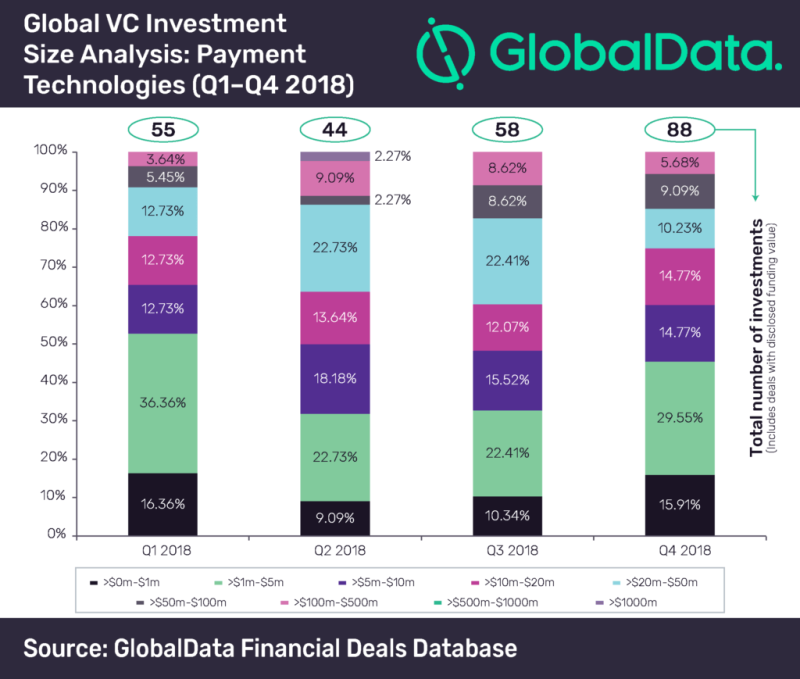