The Malaysian payments market remains cash-reliant, but has high growth potential as it shifts towards digital payments.

There has been significant progress in the adoption of card-based payments, which recorded a CAGR of 17.4% between 2015 and 2019.

Government initiatives including the introduction of an interchange fee cap, the migration of payment cards to support PIN and contactless payments, and the expansion of POS terminals have all contributed to the market’s ongoing digital transformation.

The availability of low-cost basic financial and banking services, and banks expanding their reach via agent networks and digital banking have also supported growth.

The adoption of contactless technology, rising smartphone penetration, e-commerce growth, and the emergence of alternative payment methods are expected to boost electronic payments in Malaysia.

The debit card payment volume rose significantly from 89.7 million in 2015 to 364.4 million in 2019, supported by rising adoption of contactless technology.

As part of the Malaysian Chip Card Specification initiative, all debit cards in the country were migrated to contactless by 1January 2018. In line with this trend, the number of contactless POS terminals also rose by 90.3% in 2018 to reach 207,562.

Transactions via the mobile channel continued to gain traction during the four years to 2019, leveraging the high rate of mobile phone penetration in Malaysia.

The number of customers subscribed to mobile banking services rose from 4.4 million in 2017 to 6.6 million in 2018. The introduction of a common QR standard, DuitNow QR, in July 2019 will further drive growth in mobile payments.

BNM has also completely waived interchange fees for any payments made via domestic debit cards to the government or its agencies until 31 December 2020. BNM also plans to have 800,000 POS terminals in place in Malaysia by 2020.

In line with this, the Market Development Fund was set up by the government for the development of POS infrastructure.

Prepaid cards are increasingly gaining acceptance among Malaysian consumers, as they do not require a bank account and are accessible to consumers who do not qualify for a credit card.

The prepaid card market registered robust growth in terms of number of cards in circulation, recording a CAGR of 8.0% during the four years to 2019. The transaction value increased from $1.5bn in 2015 to $3.9bn in 2019 at a CAGR of 28.2% – a trend that is expected to continue over the next five years.

The number of POS terminals has grown strongly, rising from 278,266 in 2015 to 620,855 in 2019 at a CAGR of 22.2%. With mobile payments increasing in popularity, banks are introducing new POS terminals that support multiple mobile wallet solutions.

In October 2018, Hong Leong Bank introduced new POS terminal that can be used to accept contactless payments as well as QR code-based payments from WeChat Pay MY, Alipay, and Boost users. 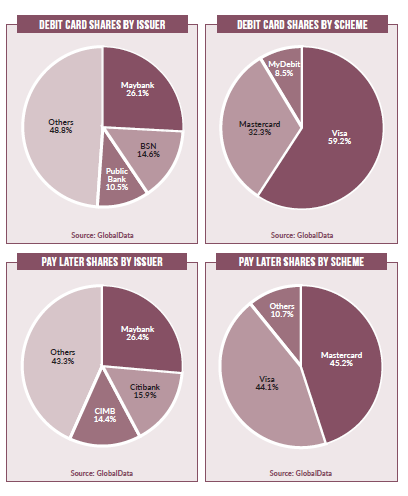