Cash remains the preferred consumer payment instrument in Kazakhstan, due to a lack of adequate banking infrastructure, limited awareness of electronic payments, and low acceptance at retailers

Despite its dominance, use of cash is expected to decline gradually over the next five years as a result of initiatives by the government and banks. These include expanding the banking infrastructure and financial literacy, a de-dollarisation plan, requiring retailers to install POS terminals, and limiting cash transactions for sole proprietors and companies, with tax incentives for businesses that accept payment cards. As a result, the share of payment cards is expected to rise betwen now and 2021.

In November 2012 the central National Bank of Kazakhstan (NBK) made it mandatory for certain categories of retailer to install POS terminals. On January 1, 2014 the regulation was extended to all traders, regardless of business model. Penalties for refusing to accept a card payment are a minimum of $103.80 (KZT34,620) for individual entrepreneurs and $259.50 for large businesses.

Debit card penetration in Kazakhstan stood at 74.7 cards per 100 individuals in 2016, higher than regional peers Romania (66.8), Ukraine (65.3) and Azerbaijan (47.8). This was supported by the country’s increasing banked population. 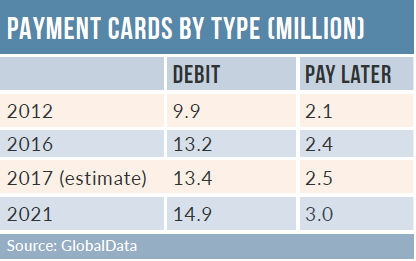 Kazakhstan has made substantial progress in financial inclusion, with the percentage of the population aged 15 or above with a bank account rising from 46.2% in 2012 to 61.8% in 2016. Most bank customers became cardholders through payroll projects, and most cards in circulation are debit cards.

Growth in debit cards has also been supported by an increase in the number of social cards. The government distributes social benefits such as pensions and scholarships through banks. KazPost also played a key role in promoting debit cards, and is authorised to issue payment cards. However, debit cards are primarily used to withdraw cash rather than at POS terminals. Banks are attempting to counter this by offering reward points, discounts and cashback.

The Khazak credit card market is still developing, with penetration of just 13.4 cards per 100 individuals in 2016. However credit cards registered the fastest review-period (2012–16) CAGRs of 19.2% and 30.8% in terms of transaction value and volume respectively.

In particular, banks have adopted customer-segmentation strategies to increase credit card penetration, with many targeting niche markets such as high-income individuals.