In Saudi Arabia, cash is the preferred method of consumer payment, accounting for over 90% of the total transaction volume.

Although use of payment cards – primarily debit cards – is gradually rising, they are mostly used to withdraw cash rather than make payments. However, the government has taken initiatives to promote electronic payments, including the introduction of the Wage Protection System regulation in September 2013. 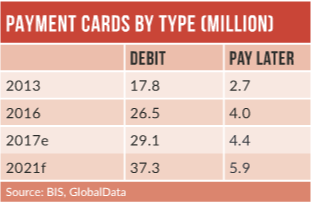 The gradual adoption of contactless technology and the emergence of e-commerce – supported by the availability of several alternative payment methods – are likely to drive the payment card market throughout the next five years.

Debit cards are the dominant card type in Saudi Arabia. The Saudi Arabian Monetary Authority (SAMA) has taken a number of initiatives to encourage electronic payments, including establishing the Mada electronic payment system and introducing mandatory wage payments into bank accounts. In September 2015, SAMA launched a modified payments network, linking all ATMs and POS terminals to a central payment switch.

Pay-later cards accounted for only 6.1% of the overall transaction value in 2017. Key factors inhibiting the growth of credit cards include the debt-averse nature of Saudi consumers, and merchant reluctance. The central bank has also set a minimum income requirement for credit cards at SAR24,000 ($6,400) per annum for banked consumers and $8,000 for non-banked consumers, making credit cards available only to certain parts of the population.

Saudi Arabia’s e-commerce market registered a strong review-period CAGR of 25.2%, supported by rises in the young population and smartphone penetration