The US fight against cashless technology is in full force with new legislation that could ban cashless stores.

It’s a bold move against the wave of digital technologies that have inevitably entered the US. Giants such as Amazon and Walmart strongly oppose the bill.

Furthermore, an increasing number or retailers favour cashless payments. They are efficient and secure for both the customer and merchant. Number of robberies will reduce with less cash held.

However, lawmakers in the US argue that completely cashless stores discriminate against consumers that do not have access to cashless technologies, creating an even further socioeconomic divide.

The latest edition of the Federal Deposit Insurance Corporation’s national survey on financial inclusion in the US revealed that approximately 93% of the country’s households include at least one individual who owns a bank account. However, in a country with more than 300 million residents, the remaining 6 to 7% make up a group of significant size.

According to the New York Times, the bill was first put forward in September 2018. If cities passed it, those who violated the conditions could face civil fines and potentially criminal charges.

This year the Philadelphia City Council and the New Jersey Legislature passed the bill. Now other cities including, New York, San Francisco and Washington are potentially looking to do the same.

Massachusetts has had similar – though rarely enforced – legislation. The state passed a similar bill in 1978.

Lawmakers did amend the bill in December 2018 that exempted retailers inside airports, car rental companies, and certain parking facilities.

US cashless society: not looking likely

US cashless technology as evolved over recent years. The trend towards cashless is heating up around the world and for some obvious reasons; better understanding of consumer behaviour, efficient accounting and access to data.

Both Amazon and Walmart have been testing cashless store solutions. Amazon reportedly aims to open 3,000 cashless stores by 2021.

“Cash is now seen by some as cumbersome, heavy and clunky to carry around and no longer an efficient payment method. We regularly hear predictions about when the UK will become cashless, but cash should not be underestimated as it continues to play an important part in the lives of many.

“People understand cash and can easily manage it, as it has boundaries. Small amounts of cash are still carried by a large percentage of the population, but it is rarely used as the main form of payment these days. There is no doubt that the UK is transforming into an economy where the use of cash is reducing, but I believe cash still has and will have a place in society as it moves from a currency of convenience to one of insurance.”

Across the US, cash usage is gradually declining while mobile payments and cards continue to rise. The growing number of digital solutions will likely accelerate the shift towards online payments. In June 2018 JPMorgan Chase launched its mobile-only bank, Finn.

However, cash remains an important part of the US market. According to CNBC, the cash in circulation in the US has grown at a 5% annual rate for more than 20 years. 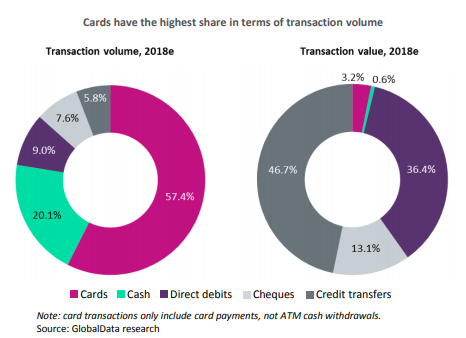