Credit card debts are just one of many causes of financial anxiety reported by Americans in a survey that highlights the disastrous impact of the coronavirus pandemic on people’s personal finances.

According to a survey released by the National Endowment for Financial Education (NEFE), nearly nine out of 10 (88%) respondents say the covid-19 crisis is causing stress in their money situation.

Nearly half (48%) say they worry about their ability to pay bills: 28% for both housing payments and utilities; 19% for health care bills. 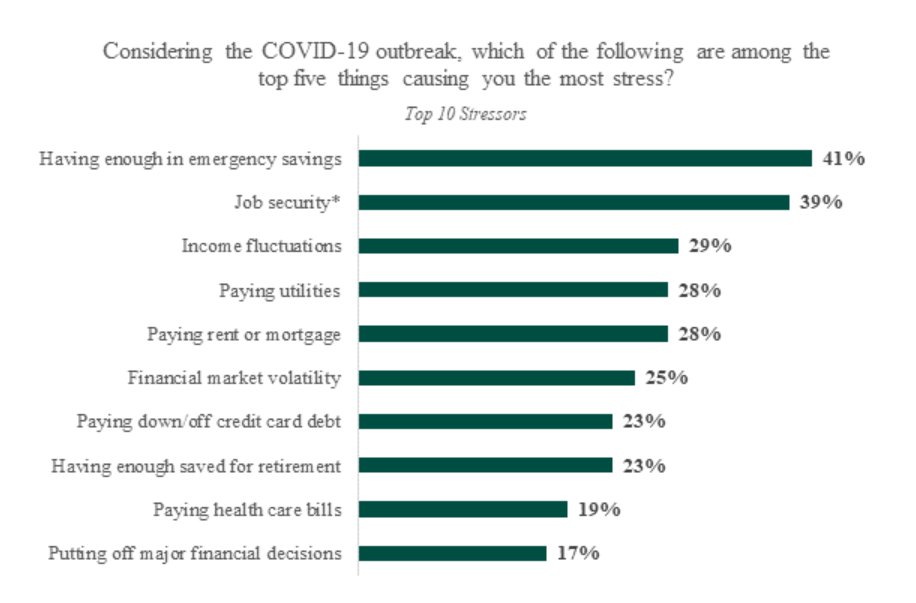 Stress about job security is also escalating. This is no surprise, given the Department of Labour’s recent announcement that one in 10 Americans is now seeking unemployment benefits.

The NEFE survey finds that 39% of employed Americans say stress over job security is among their top financial concerns.

About 29% of respondents say they are concerned about loss or reduced income. And 25% say they are worried about financial market volatility (e.g. stock market losses).

The survey also finds that the outlook for personal finances a year from now is proportionately low.

Taking steps to deal with the situation

While concern about money is clear during this health crisis, a majority (75%) of Americans say they have taken steps to adjust their personal finances due to the covid-19 outbreak.

Over two in five (42%) note they have cut monthly expenses, 26% are putting off major financial decisions (e.g., buying/selling a home, making a major purchase), and 22% have increased contributions toward savings (e.g., emergency, retirement).

Just 17% say they have tapped into an emergency savings, with 6% saying they have borrowed against retirement savings.

Additionally, only 12% say they plan to defer bill/debt payments and 10% say they have taken on more credit card debt.

The worse off categories

Overall, the groups who note the greatest level of concern about their personal financial situation are: