The Malaysian payments market remains cash-reliant, but has high growth potential as it shifts towards digital payments. There has been significant progress in the adoption of card-based payments, which recorded a CAGR of 17.4% between 2015 and 2019.

Government initiatives including the introduction of an interchange fee cap, the migration of payment cards to support PIN and contactless payments, and the expansion of POS terminals have all contributed to the market’s ongoing digital transformation.

The availability of low-cost basic financial and banking services, as well as banks expanding their reach via agent banking networks and digital banking channels have also supported growth.

The adoption of contactless technology, rising smartphone penetration, growth in e-commerce, and the emergence of alternative methods are further expected to boost electronic payments in Malaysia.

The debit card payment volume rose significantly from 89.7 million in 2015 to 364.4 million in 2019, supported by rising adoption of contactless technology. As part of the Malaysian Chip Card Specification initiative, all debit cards in the country migrated to contactless by 1 January 2018.

Financial transactions made via the mobile channel continued to gain traction during the four-year period to 2019, leveraging the high level of mobile phone penetration among the Malaysian population. According to BNM, the number of mobile transactions stood at 257.4 million, valuing MYR100.1bn ($24.2bn) in 2018, compared to 107.7 million and $12.3bn in 2017.

The number of customers subscribed to mobile banking services rose from 4.4 million in 2017 to 6.6 million in 2018. The introduction of a common QR standard, called DuitNow QR, in July 2019 will further drive the growth of mobile payments in Malaysia.

The central bank has also completely waived interchange fees for any payments made via domestic debit cards to the government or its agencies until 31 December 2020. The central bank also plans to have 800,000 POS terminals across Malaysia by 2020. In line with this, the Market Development Fund was set up by the government for the development of POS infrastructure. 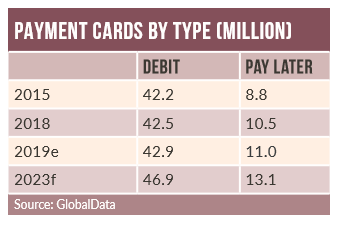