Brazil remains a cash-driven economy, with cash accounting for 77% of total payment transaction volume in 2018.

However, as a result of government initiatives, efforts by banks and growing consumer awareness and confidence in digital payments, Brazilians are gradually shifting towards electronic payments.

The government has taken a number of steps to boost financial inclusion and promote electronic payments in the country, including expanding the banking infrastructure in rural regions, appointing banking correspondents, and introducing regulation allowing consumers to open bank accounts through digital channels.

With the necessary payment infrastructure in place – which includes a wide ATM network and the highest proportion of POS terminals among its regional peers – consumers are gradually becoming more aware of the benefits of payment cards.

The frequency of card payments increased from 23.2 times per card per year in 2014 to 33.4 in 2018. Over the next five years, e-commerce growth and the emergence of contactless technology will help drive growth in the payment card market.

Debit card penetration is high in Brazil, and, on average, every Brazilian holds at least one debit card.

This is supported by growth in the country’s banked population, with the government and banks striving to provide access to financial services nationwide. In an effort to increase financial inclusion, the government passed Resolution 4,480 in April 2016, requiring banks to allow consumers to open accounts using electronic channels.

The measure applies to checking, time and savings deposit accounts, and removes the need for physical IDs or proofs of address. Banco Inter was one of the first four banks to introduce the measure, and its account numbers jumped from 10,000 in March 2016 to 80,000 in December 2016.

The debit card payments transaction volume is also rising, registering a significant CAGR of 12.3% between 2014 and 2018. The capping of debit card interchange fees from October 2018 will encourage debit card transactions in coming years. 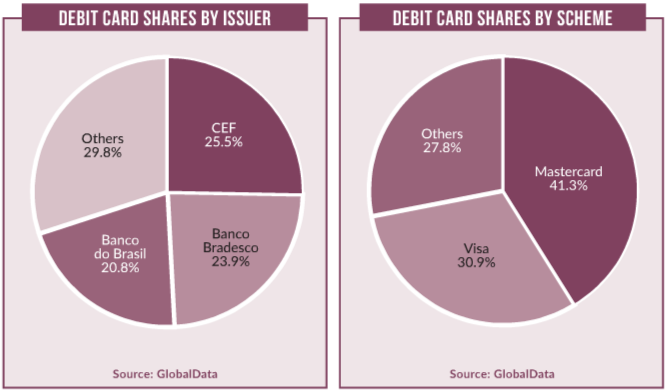 Despite low penetration, pay-later cards are the preferred card type for payments, accounting for 60.3% of total card payments by value in 2018.

The pay-later payment frequency stood at 46 times per card per year in 2018, in comparison to 27 for debit cards. Many banks offer benefits in the form of reward programmes and cashback to encourage card use.

Growth is also supported by the availability of instalment facilities for big-ticket purchases on credit cards. The decrease in credit card interest rates charged by leading banks will also aid growth in this space. 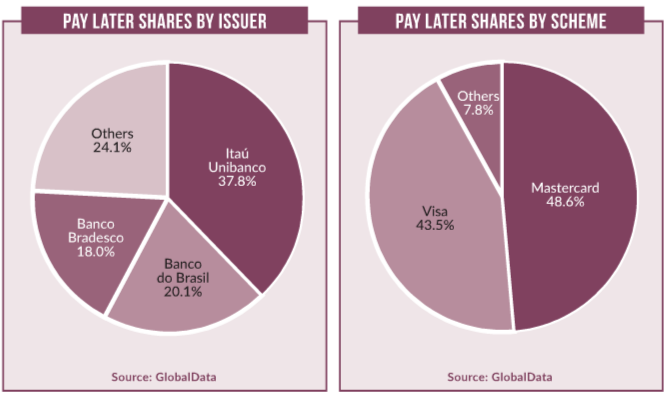 Brazil’s e-commerce market grew significantly from BRL39.5bn ($11.92bn) in 2014 to $19.23bn in 2018, at a CAGR of 12.7%, as improvements in technology and rising online and mobile penetration resulted in enhanced consumer confidence in online transactions.

With major banks offering customised cards for online purchases, as well as the introduction of alternative solutions such as Apple Pay, Google Pay, Samsung Pay, Visa Checkout and Masterpass, the market is expected to record healthy growth.

Prepaid travel cards have became popular among Brazilian consumers, primarily as a result of the government’s decision to levy a 6.38% tax on transactions made with credit cards outside the country from 2011.

Consequently, most Brazilians chose prepaid travel cards specifically for foreign trips. As the cards were loaded with local currencies, transactions were treated as domestic payments and attracted a tax of just 0.38%. However, with effect from December 2013, the tax on international prepaid cards was raised to 6.38%, reducing demand.

The economic crisis that began in mid-2014 also led to an overall decline in demand for prepaid cards until 2016. In March 2018, Banco Central do Brasil announced a cap on debit card interchange fees, with effect from 1 October 2018. Charges are now limited to 0.8% of the transaction value, and the average must not exceed 0.5%.

The central bank also noted that the maximum debit card transaction value could be reduced, or a cap on credit card interchange fees imposed.