The payment card market in Belgium is well developed, with a penetration rate of 2.0 cards per inhabitant.

Improved payment infrastructure, a strong banked population, a gradual shift from cash to card-based transactions, and the expansion of retail and e-commerce markets have supported growth.

Belgian consumers are very comfortable with established payment instruments, with domestic scheme Bancontact the most commonly used card in the country. The EU cap on interchange fees for banks operating in the EU, and restrictions on cash transactions by Belgium’s central bank have also helped drive electronic payments.

With increased adoption of mobile POS solutions by smaller merchants, electronic payments are set to surge over the next five years. The launch of a contactless payment feature by Bancontact and the presence of Google Pay are expected to boost Belgium’s nascent contactless space. Belgian consumers strongly favour debit cards over other types, with Bancontact the most frequently used. 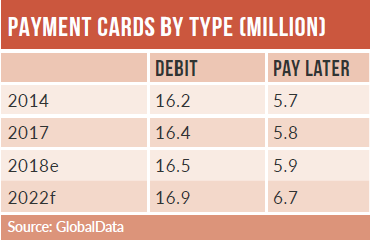 Until a cap implemented by the EU in 2015, its lower interchange fees compared to international schemes gave it a significant edge in the market – and the new fee rules have had little impact on its dominance. In order to offer enhanced convenience to users, Bancontact cards are now equipped with contactless functionality, enabling debit card holders to make transactions of up to €25 ($30) without needing to enter a PIN.

Pay-later cards are not very popular in Belgium, primarily due to consumer preference for debt-free payments. The ready availability of overdraft facilities also tempers demand.

Pay-later cards represented only 12.5% and 15.5% of the overall payment card transaction volume and value respectively in 2018. However, with the debit card market inching towards saturation, the underserved pay-later space could prove lucrative.

To this end, banks are providing pay-later cards as part of bundled packages and offering co-branded cards to increase uptake. The e-commerce market grew significantly from $7.30bn in 2014 to $13.18bn in 2018, at a CAGR of 15.9%. Improvements in technology and rising online and mobile penetration have resulted in enhanced consumer confidence in online transactions.

To capitalise on this, online retailers have introduced events such as Single’s Day and Belgian Friday. With the introduction of alternative solutions such as Google Pay and PayPal, the market is anticipated to grow further.

The prepaid card has market registered a significant decline in the last five years in terms of cards in circulation, largely due to the retirement of Proton prepaid cards in December 2014.

Once the most widely used prepaid card for small-value transactions, they were phased out as consumers turned to Bancomat cards.