Visa and Mastercard’s supremacy in Europe is facing a strong challenge, as the European Central Bank (ECB) has finally put in motion a plan to tackle the pair’s 80% market share dominance. The ECB has tried to tackle the American duopoly in Europe for many years and this time it might just work, through the Pan European Payment System Initiative (PEPSI).

With technology being increasingly democratised, relying on large corporations to process payments or issue cards isn’t as much of a necessity as it used to be. However, this doesn’t just mean that startups will charge on and take over the incumbents. In the case of most countries where other scheme providers dominate, they do so through partnerships with domestic banks, government support, or both.

The view of the ECB and other EU institutions is that the high dependence on non-EU payment companies creates a risk for the market. Therefore, the ECB intends to encourage and support any banking institution that might come along with an alternative solution. To this end, the ECB is basing the PEPSI on the current Single Euro Payments Area (SEPA) instant credit transfer system, in order to make it easier for institutions to implement a system similar to one they already know.

The intention seems to be to simply reduce the existing market dominance of the two US giants rather than ousting them from the EU altogether, and doing so might not be all that difficult. In Germany, there already exists an electronic direct debit payment method supported by banks, called ELV, which is becoming increasingly popular (Source). The system runs by authorizing a receiving company or merchant to withdraw money directly from the bank account of the customer, for example. While Visa and Mastercard hold a strong presence in Europe, their cards aren’t necessarily the only ones in the market. In some countries, they operate via a partnership with a local scheme, as seen in France, where Groupement des Cartes Bancaires (CB) cards usually have either Visa or Mastercard branding in addition to CB branding. 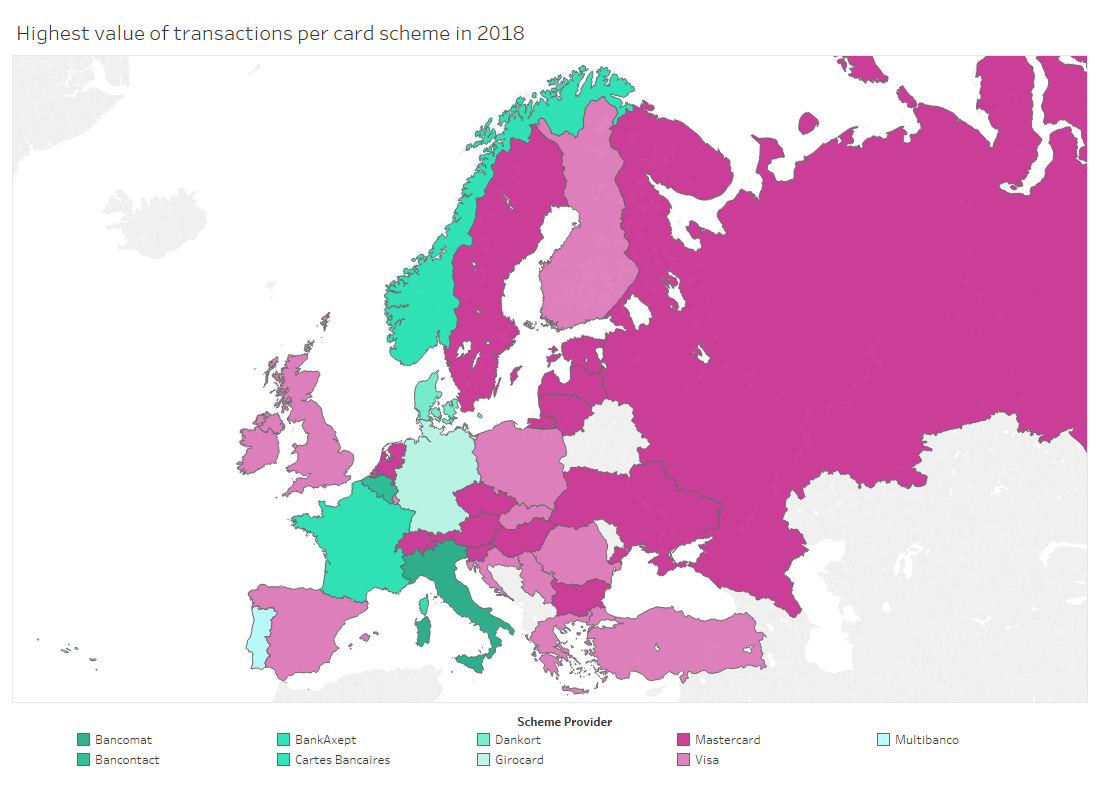 This is not the first time a country or region has tried to chip away at the US card duopoly. One country that has seen great success in this regard is India, through its seven-year-old payment domestic card scheme, RuPay. Today, the government-backed Indian company holds a market share of roughly 50% in the issuance of debit cards in the country. This success is driven in part by advantages like lower acceptance fees for merchants, due to the fact that the Indian government is actively supporting RuPay’s implementation and legislation (Source).

With Visa and Mastercard having to fight on several fronts in order to maintain their dominance, it would be no surprise if we see the successful implementation of an EU-backed card issuer in the next couple of years. A potential role in the future for the two American giants could be one similar to what we see in France today, whereby Visa and Mastercard shift more towards being international facilitators rather than domestic payment players. Only the future will tell what the scheme ecosystem will look like but one thing is certain: the status quo is under a lot of pressure.