Canadian paytechs are calling for the introduction of legislation enabling them to be granted direct access to Canada’s forthcoming real-time payments system. Like other countries, Canada has seen an acceleration in digital payments adoption during Covid, highlighting the need for safe and reliable digital payments.

The Canadian government introduced the Retail Payment Activities Act (RPAA) in its 2021 budget, which had its first reading in the House of Commons on 30 April. The Act aims to implement the Retail Payments Oversight Framework for non-bank PSPs providing retail payments services, which the government first proposed in 2017.

Currently, non-bank PSPs aren’t subject to regulatory oversight other than being required to comply with Canadian anti-money laundering regulations. Under the RPAA, non-bank PSPs will be regulated by the Bank of Canada. 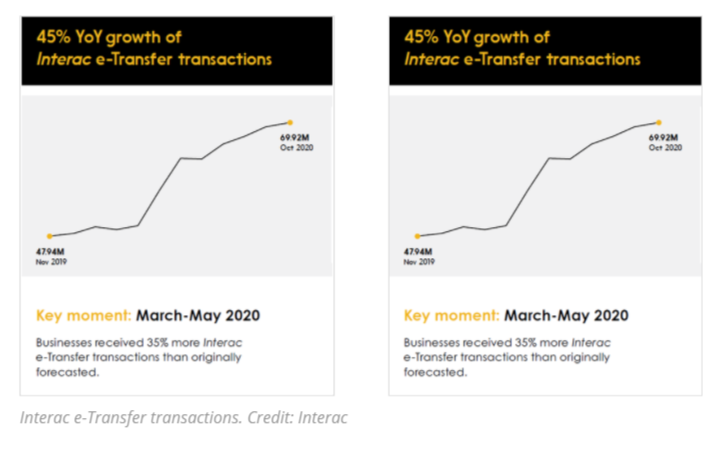 The announcement was welcomed by Payments Canada, a non-profit body representing its member FIs, which has a legislative mandate to establish and operate Canada’s core clearing and settlement systems under the Canadian Payments Act.

A more guarded response came from the non-profit association Paytechs of Canada, which wants regulation to go hand-in-hand with direct access to core payments infrastructure for its non-bank paytech members.

“Payment technology companies are worried that the government is promising them more regulation, but not access – more cost, without a corresponding benefit,” says the association’s executive director Alex Vronces.

“We’re thrilled that the RPAA was included in the budget, as this is something we and our members and stakeholders as well as PSPs have advocated for strongly,” says Anne Butler, Payments Canada’s chief legal officer and vice president of policy and research.

Butler says that, in the last decade, the Canadian payments landscape has changed dramatically, creating a huge vibrant fintech and paytech ecosystem that coexists with regulated FIs. “The RPAA is about making the tent bigger, but also ensuring that the tent poles which are put in to make the tent bigger are strong enough to keep those inside safe.”

Butler notes that Payments Canada will work with the government’s Department of Finance to ensure the RPAA’s requirements are implemented quickly. “The RPAA will bring uniformity of regulation to the Canadian payments industry, which we need to remain competitive, and will support innovation in our journey into the digital economy.”

Paytech regulation is timely, as Payments Canada plans to launch the ISO 20022-based Real-Time Rail (RTR) instant payments network towards the end of 2022 based on clearing and settlement infrastructure from Mastercard’s Vocalink subsidiary. Butler envisages that banks and PSPs will be able to introduce innovative overlay services on top of the RTR such as instant 24/7 P2P and B2B payments and social media payments.

Canada’s regulatory environment can act as a barrier for paytechs seeking access to payments networks or acquiring banking licences. “Technology companies that hold and move money have a hard time in Canada’s financial sector,” says Vronces

Canada’s banking and payments industry is dominated by six major banks, and it’s very difficult from a regulatory viewpoint for newcomers to obtain banking licenses.

In March 2021, Revolut announced the closure of its Canadian operation, as Canada’s restrictive regulatory environment prevented it from providing the full range of services it offers in countries such as the UK. However, Revolut has applied for a US bank licence.

This access regime is unsatisfactory for paytechs. Banks either charge high fees for supplying paytechs with access to Payments Canada’s systems, or they may refuse to provide access. Another drawback of indirect access is complexity and slower service levels.

Introducing paytech regulation will be an advantage to newcomers, Butler argues. “Bringing paytechs under the Bank of Canada’s regulatory cover is the first step towards widening membership of Payments Canada beyond regulated FIs,” she said. Butler thinks the rules and standards for new entrants should be neither too lax nor too restrictive from a competitive perspective, so there is a balance between considering the risks and opportunities for competition.

“By ensuring that all competitors face comparable regulatory oversight and checks and balances for the functions they perform, there will be an enhanced level of trust amongst incumbent FIs and PSPs,” says Butler.

Another hindrance to newcomers is lack of access to customers’ financial data. Unlike the UK, the EU and Australia, Canada has yet to introduce open banking, although the government has held stakeholder consultations about the technology. Introducing open banking would level the playing field between incumbent banks and newcomers, as fintechs would be able to more easily on-board new customers by providing secure, consent-based access to account applicants’ existing financial data.

The government’s open banking consultation is limited to financial data mobility, which means Canadian fintechs would not be able to leverage open banking APIs to initiate payments from customers’ bank accounts. This contrasts with the UK where open payments has spurred fintech innovation.

The RPAA will promote growth, innovation, and competition in digital payment services, while making these payments services safer and more secure for consumers and businesses, a Department of Finance spokesperson tells EPI.

“The government’s commitment to introducing legislation to implement the Retail Payments Oversight Framework (RPOF) acknowledges the accelerated adoption of digital payments due to COVID-19,” said an Interac spokesperson. “This is a trend Interac has observed across our network, with Canadians shifting more and more to digital payment methods such as Interac e-Transfer as a way to adapt to pandemic lockdowns and manage their financial needs.”

The RPOF has had a long lead time. It was initially outlined in a consultative document by the Department of Finance in 2017 in response to the rapid pace of innovation in the retail payments space.

Following stakeholder consultations, the government first announced its plans for the RPOF in its 2019 budget.

Overseen by the Bank of Canada, the regulatory regime will provide a risk-based approach to regulating PSPs to help facilitate greater participation in, and access to, Canada’s core retail payment systems. These include Payments Canada’s batch-based EFT system, which runs over the Automated Clearing Settlement System (ACSS), and the RTR. As part of its modernisation initiative, Payments Canada plans to replace the ACSS with the ISO 20022-based Settlement Optimisation Engine (SOE).

“By ensuring that risks are well managed, the Bank, through its new supervisory role, will support confidence in payment service providers and should further encourage competition and innovation in retail payments,” Timothy Lane, the Bank of Canada’s deputy governor, said in a February 2021 speech.

As part of its review of the Canadian Payments Act in 2018, the government proposed an associate member class for Payments Canada to widen access for non-bank payment service providers to the ACSS and its replacement the SOE as well as to the RTR.

“We’ll advocate for the Canadian Payments Act to be revised to state that entities regulated by the Bank of Canada should be eligible for Payments Canada membership,” Butler explains.

The RTR’s purpose is to make it easier for consumers and businesses to pay and transfer money from their bank accounts. Currently, Canada’s FIs lack efficient ways for consumers and businesses to make electronic payments from their bank accounts. They can either set up preauthorised debit payments, which take place overnight, or use Interac e-Transfer, which only allows consumers to transfer up to C$3,000 ($2,489) per day.

The UK saw significant growth in fintech services following the Bank of England’s decision in 2017 to grant non-bank PSPs direct access to the Faster Payments scheme. For example, new entrants such as Wise (formerly TransferWise), payments-as-a-service provider Modulr, and Starling Bank have been able to develop innovative services due to their direct access to Faster Payments.

Payments Canada’s goal is to build the RTR in such a way that it enables not just incumbent FIs to create services on top of the instant payment scheme but also new entrants who become eligible for Payments Canada membership. “The Canadian Payments Act needs to be amended to take full advantage of the RPAA so PSPs have the option to go direct to the RTR or if they prefer, access the system through a bank,” said Butler.

Vronces’ view is that the government does want to amend the Canadian Payments Act to make broader payment system access converge with, if not quickly follow, the implementation of the RPAA. “But timing everything underway in the payments ecosystem, so that they converge, is crucial,” he says. “Timing will make or break many of the paytech start-ups and challengers. Promising international players have come and gone, such as Revolut, while others avoid the Canadian market altogether.”

“Unfortunately, timing already isn’t working in our favour,” Vronces adds. “The RTR is slated to launch in 2022. But the necessary legislative change to broaden access won’t come to fruition by next year. Incumbents will be free to innovate on top of the RTR, but payment technology companies will be limited to playing a more passive role or watching from the sidelines. In the race to capture the benefits of payment system modernisation, some will get to start running before the others do.”

According to Vronces, the government must not allow Canadian Payment Act amendments to fall off the legislative agenda. “They need to keep pushing and ensure the new regulation converges with broader access,” he said. “The risk of more regulation without access is payment technology companies struggling to survive, or finding opportunities they’re not getting here in other jurisdictions. Either way, Canadians will lose out.”

“Payments Canada should develop its RTR roadmap with payment technology companies in mind,” Vronces says. “Features Payments Canada should put in its RTR roadmap sooner rather than later include a centralised fraud management service and the introduction of a third-party payment initiation capability. Both these features would be good for payment technology companies.”

Vronces said Australia’s Mandated Payments Service  which operates over the country’s New Payments Platform real-time payment system, is a model for third-party payments initiation in Canada. The Mandated Payments Service, which is governed by a rules framework and liability model, enables customers to authorise third parties to initiate payments from their bank accounts using the NPP. 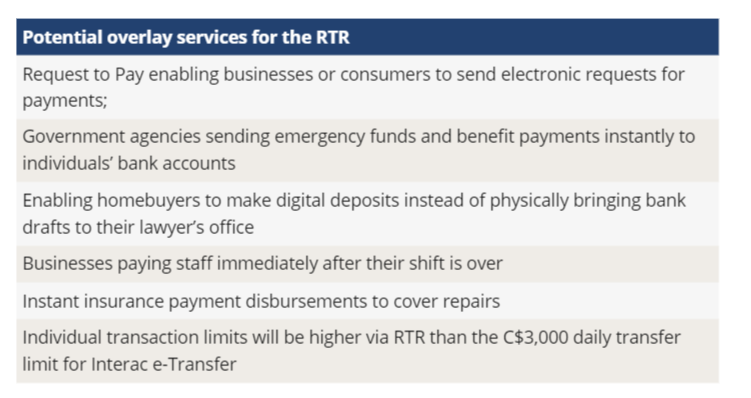