Every year, the holiday season brings a wealth of spending, and experts predict that it could be the biggest yet. But are people enjoying the holiday sales, or being more cautious? Patrick Brusnahan reports

Physical stores totalled 65% of spending on Thanksgiving and Black Friday, as well as 67% over the weekend if extended through to Cyber Monday.

Speaking to CI, Glenn Fodor, senior vicepresident and head of First Data Insights, notes: “Bricks and mortar and e-commerce both had fairly strong sales this season. In the three weeks leading up to Thanksgiving, e-commerce grew to 37% of total spend.”

Fodor continues: “In-store sales during Thanksgiving through Cyber Monday drove a bit more spending at bricks and mortar, but e-commerce is firmly north of 30% of all spending now.

According to First Data, from Thanksgiving to Cyber Monday, they saw 5.5% YOY spending growth – higher than the 5% YOY growth experienced by the market as a whole. The growth was attributed to increased average ticket sales, which grew by 4.3% compared to 1.4% for the market.

“Our report found that to start the holiday season, SMB spending growth has outpaced the total marketplace, and while SMBs are driving transaction growth, they have also figured out how to encourage customers to spend more per visit,” Fodor explains.

“While affordable items may still remain king, our data found the higher spend per visit at SMBs has helped drive successful spending growth, particularly in highcustomer- service-oriented retail categories, such as building materials (22.8%) and small electronics (17.8%).” 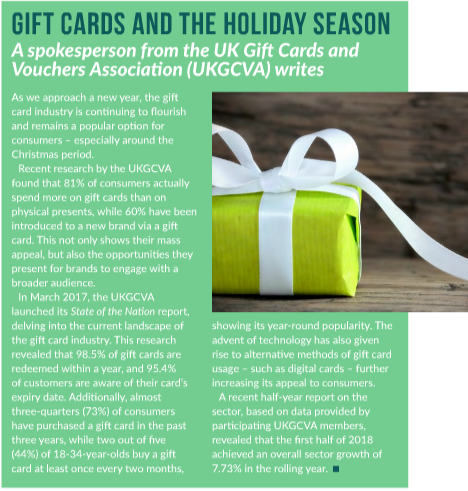 Fodor concludes: “Considering the strong 2017 holiday season overall, the start to this year’s season was relatively solid and the pre- and post-Thanksgiving and Black Friday trends are directionally in line with historical norms.

“While it is difficult to forecast overall growth expectations, we can see from government data that US consumer sentiment and employment markets remain intact, further evidenced by our initial readings of holiday season growth.” 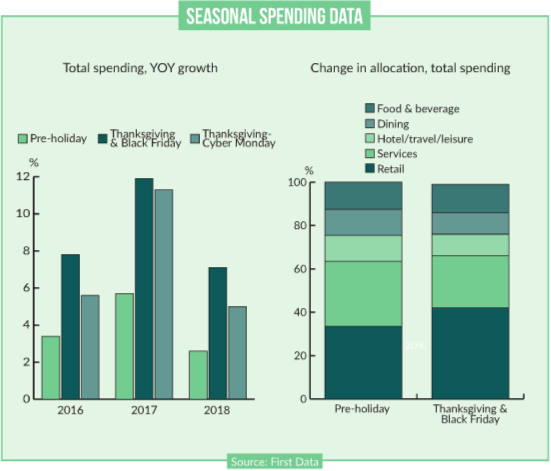