The shrinking of digital assets continues to plague the industry, with cryptocurrencies
losing up to 50% of their value in the past year. While volatility is not unusual across
the sector, the market is far from the highs it once experienced. Briony Richter reports

Whether an advocate or critic, there is no denying the impact that cryptocurrency has had around the world. Some governments have positively responded to its growing popularity, while others have exclusively fought against it.

One of the most significant factors in the market’s recent decline is the refusal of US regulators to approve a number of exchange traded funds based on Bitcoin. This is primarily a result of rising concerns over the security and stability of cryptocurrencies and how they are stored.

However for some experts, the Bitcoin bubble was always a fad – and one that has, inevitably, finally burst. 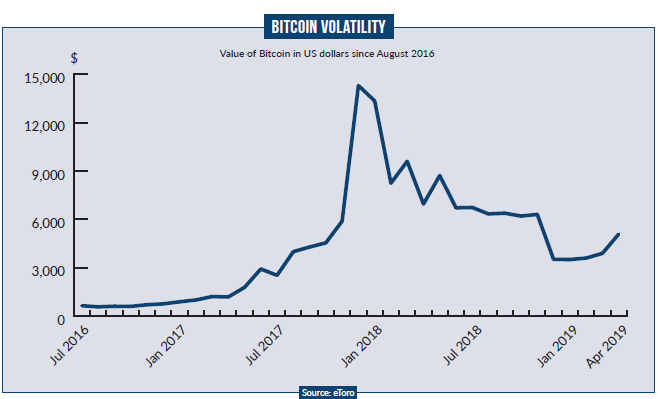 Crypto in the UK

The UK’s approach to cryptocurrencies regulation has been fairly restrictive. There are no set guidelines or laws surrounding their use; however, none are considered legal tender.

In the UK, cryptocurrency exchanges must be registered with the FCA, although some may opt to obtain an e-licence instead. While the popularity of cryptocurrency among UK consumers is still relatively low, Parliament has been reviewing whether crypto-assets should be regulated.

A Commons Select Committee recently highlighted that if the UK develops a solid regulatory environment for crypto-assets, the country could be well placed to become a global centre for this type of activity, but the ecosystem has yet to develop.

With the undeniable growth in popularity, a number of different of fintechs have attempted to bring crypto cards to the mainstream. In April 2019, Coinbase launched its crypto debit card, enabling UK consumers to spend crypto effortlessly.

The card is linked to users’ Coinbase account crypto balances, allowing them to pay in-store and online using Bitcoin, Ethereum and Litecoin, among others. Customers can use the card at multiple locations worldwide, making payments through contactless or chip and PIN, as well as ATM cash withdrawals.

Zeeshan Feroz, UK CEO at Coinbase, comments: “Making crypto easier to use and spend is central to our mission to create a more open financial system. Thanks to the launch of the new Coinbase Card, in partnership with Paysafe, customers now have greater flexibility and control over how they spend their crypto, and the ability to realise its value to buy tangible things or experiences.”

Coinbase is currently only available in the UK; however, the company plans to support other European countries in the coming months. Cryptocurrency debit cards allow customers to spend cryptocurrencies at merchants and retailers.

However, the most significant difference between cryptocurrency cards and normal debit cards is that payments are automatically and instantly directed to partner cryptocurrency exchanges, and then debited from users’ cryptocurrency balances. A major benefit of using these cards, and what Coinbase is offering, is the avoidance of typically high currency exchange rates for international transactions.

This is especially popular for consumers travelling abroad and needing to use a card to pay in local currency. However, much as the exchange perk is useful, it is highly unlikely that these cards will take over normal debit cards distributed by banks and challengers.

While cards such as the one offered by Coinbase familiarise consumers with cryptocurrency, the instability of digital assets means it is not yet viewed in the UK as a viable means of payment. Indeed, it is not just Bitcoin that is falling in value; others, such as Litecoin, are also rapidly dropping, further calling into question the sustainability of cryptocurrency.

Storage has always been a critical element of conserving assets. As money slips into the digital world, organisations need to find ways to digitally secure alternative assets such as crypto and ICOs, and if the past few months have taught us anything, it is that managing cryptocurrency is not an easy thing to do.

Crypto-assets can be moved around using private keys – strings of numbers and letters that are unique to each asset in a wallet. They then generate public keys, which produce the public addresses a user will receive to access their crypto assets. There are several types of wallet, ranging from mobile to web and desktop.

Crypto exchanges are a relatively straightforward place to keep cryptocurrency when trading. Cash-out fees accrue less quickly, with transactions and trades taking place much faster than having to move assets from wallet to wallet. However, storing crypto does not come without its own risks. In 2018, more than $500m was stolen from Japanese exchanges, forcing the government to intervene into the future of cryptocurrency.

One of the biggest attacks in Japan was on cryptocurrency exchange Zaif in September 2018. Of the $60m stolen, around $19.6m belonged to the exchange and the rest was client money. Users can no longer withdraw or make deposits as Zaif rebuilds its system; the exchange is still unable to say when these will resume.

In December 2018, the cryptocurrency world was hit by another unexpected hurdle. Gerald Cotton, founder of crypto exchange QuadrigaCX, died suddenly in India. He was the only person who knew the password to the exchange’s cold-storage system, meaning it may never be able to repay close to $190m in client holdings.

As of 31 January 2019, there were around 115,000 users with balances signed up on the exchange, with C$470m ($348m) in fiat and C$180 in cryptocurrency. These hacks and general lack of predictability come at a time when regulators worldwide are concerned about security in the crypto-exchange market.

Cryptocurrencies are largely thought to have the potential to emerge as a transformative payment innovation. Until their instability and extreme price swings are brought under control, however, both regulators and investors have cause for concern.