As societal attitudes towards the LGBT community has continued to change and progress, so too must the actions of the financial industry. The launch of Virgin Money’s Rainbow credit card is a statement that celebrates diversity and equality, writes Briony Richter

Fifty years on after the Sexual Offences Act in 1967, it’s tempting to believe that the fight for equality has been battled and won. Sadly, across the world society is riddled with discrimination and outdated views. It’s no longer enough to make promises for change in the industry, actions speak volume.

Speaking to CI about the new Rainbow credit card, head of private sector membership programmes at Stonewall, Vicky Hayden, says: “We love this new initiative from Virgin Money! It’s great to see such visibility of the iconic rainbow colours on something as every-day as a bank card. It makes a clear statement that LGBT communities should be visibly celebrated.”

Chris Taylor, director of credit cards at Virgin Money, states: “Virgin Money believes in the positivity and the openness that the rainbow flag symbolises.

“We are delighted to launch the new Rainbow card design to mark 50 years of progress with LGBT rights, while supporting Stonewall which does such fantastic work to promote equality for the LGBT community.”

The percentage of people identifying as lesbian, gay or bisexual increased significantly last year, to 2% of the UK population. According to the Office for National Statistics, in 2016, just over one million of the UK population aged 16 and over identified themselves as lesbian, gay or bisexual. The proportion was up from 1.7% in 2015. Thus there needs to be a bigger push to develop products that suit the lifestyle of every member of society, no matter their sexual orientation. 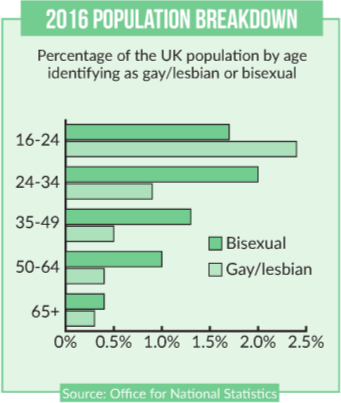 Banks and other financial institutions have taken steps to ensure a safe and equal work environment. Hayden highlights: “This is a positive move by Virgin, and one of the many steps forward we’ve seen from the financial services industry this year. Lloyds Banking Group was named number one in Stonewall’s Top 100 LGBT Inclusive Employers in 2017.

“The group also championed LGBT equality throughout their marketing, with great campaigns such as the ‘He Said Yes’ advert, as well as ‘Waiting for Mr or Mrs Right?’ which was launched in line with Bi Visibility Day. We are also seeing more banks tailor and adapt their services to meet the needs of their LGBT customers. Metro Bank were one of the first to launch ‘Mx’ as a customer prefix this year, alongside ‘Mrs’, Mr, ‘Miss’, etc to meet the needs of their trans and/or non-binary customers.”

Virgin Money’s Affinity Pride Network aims to build an inclusive and balanced workforce that all employees are part of and where sexual orientation and gender identity can be expressed openly. Although the Rainbow credit card is a positive statement of support, it will have to be the first of many as Hayden explains that the fight for equality is an ongoing battle.

“Tailored and specific products and services are only part of the story. To be a truly inclusive organisation, it’s important that staff are properly trained on the needs of their LGBT customers. This ensures they understand the right language to use, how to ask the right questions and how to treat every customer with dignity and respect regardless of sexual orientation and gender identity.”

Commenting on the achievements of 2017 and hopes for the future, Hayden concludes: “Having Lloyds’ Banking Group reach the number one spot in our Top 100 Employers list was a great highlight of this year, proving that banking – especially retail banking – cares about its LGBT colleagues and customers.

“In the new year we want to see more financial services organisations listening to, asking about and reviewing the experience for its LGBT customers and using that feedback in a positive and forward thinking way.”