As the festive season is well and truly underway consumer spending is on the rise once again. With Thanksgiving and Black Friday discounts dominating the retail sector, it can be difficult for shoppers to resist. Evie Rusman writes

Recent data from FirstData (now Fiserv) shows that Black Friday shopping at physical stores saw a 4.2% increase in sales compared to 2018. In addition, the data showed that a quarter of shoppers were willing to travel more than 25 miles to visit a particular store on Black Friday.

Another key finding was that spending via mobile wallets increased more than 80%. This comes as consumers are continually adopting new payment methods.

Glenn Fodor, SVP of Data & Analytics at Fiserv, tells CI: “Consumer spending has been strong this holiday season across all channels, and has been a primary catalyst of growth at brick-and-mortar locations and via e-commerce. The 2019 calendar gave us a late start to the holiday season, which compressed the 2019 holiday spending season across fewer days, leading to the potential for more spend per day.

“Additionally, some larger retailers have gotten better at coordinating their e-commerce selling with brick-and-mortar fulfillment, enhanced with innovative ways to encourage up-selling.

“At a macro-level, consumer spending continues to see the most rapid growth in the area of digital commerce, with spending taking place both online and via mobile devices. That, however, hasn’t been entirely at the expense of brick-and-mortar growth, or discouraged shoppers from traveling great distances to shop at physical stores.”

Fodor also predicts that brick-and-mortar spending will continue to hold its own during the holiday period, while e-commerce has a strong momentum.

“This continued right through to Cyber Monday where we saw sales increase 6.9% compared to 2018 data. These figures show that consumers have not only been buying more, but also spending more than last year – which will no doubt come as welcome news to the retail sector as the countdown to Christmas gets underway.”

Even though Black Friday spending rose, Barclaycard data shows that as a whole customers are being more careful than usual when it comes to holiday spending.

According to the data, 36% of consumers intend to spend less than usual on Christmas this year, with 42% of those cutting back saying it’s because they are looking to spend less money overall. Additionally, 55% of Brits are now concerned about potential rising prices of everyday goods impacting their ability to spend money, an increase of 4% from last month.

Political uncertainty is also another reason for consumers cutting back. Barclaycard data outlines that positive sentiment about the UK economy remains low, with only 31% of UK adults expressing confidence. This percentage drops to 27% for those aged 18-34.

Esme Harwood, director at Barclaycard, says: “With a backdrop of political uncertainty, consumer confidence has remained low this month – particularly amongst younger consumers – as Brits focus on discount shopping in a bid to tighten their purse strings this Christmas.

“Throughout 2019 we have seen the nation managing their budgets by seeking greater value for money, and this trend looks set to continue in December. As we head into the busy shopping season, retailers will no doubt be crossing their fingers for consumer confidence to rise enough to deliver some Christmas cheer.”

Fraud jumps in US

With holiday spending there is a greater risk of fraudulent activity; new data from iovation, a TransUnion company, shows that over the Thanksgiving weekend fraud jumped 60% from 2017 to 2019 in the US. The findings are based on the online retail transactions analysed for its customers between Thanksgiving and Cyber Monday over the last three years.

Greg Pierson, TransUnion Senior Vice President of Business Planning and Development, says: “This data unfortunately reinforces the fraud fears that consumers expressed in our recent survey. Among the conclusions from TransUnion’s 2019 Holiday Retail Fraud Survey: nearly half of all consumers, 46%, are concerned with being victimised by fraudsters this holiday season with baby boomers being the most concerned of any generation at 54%.” 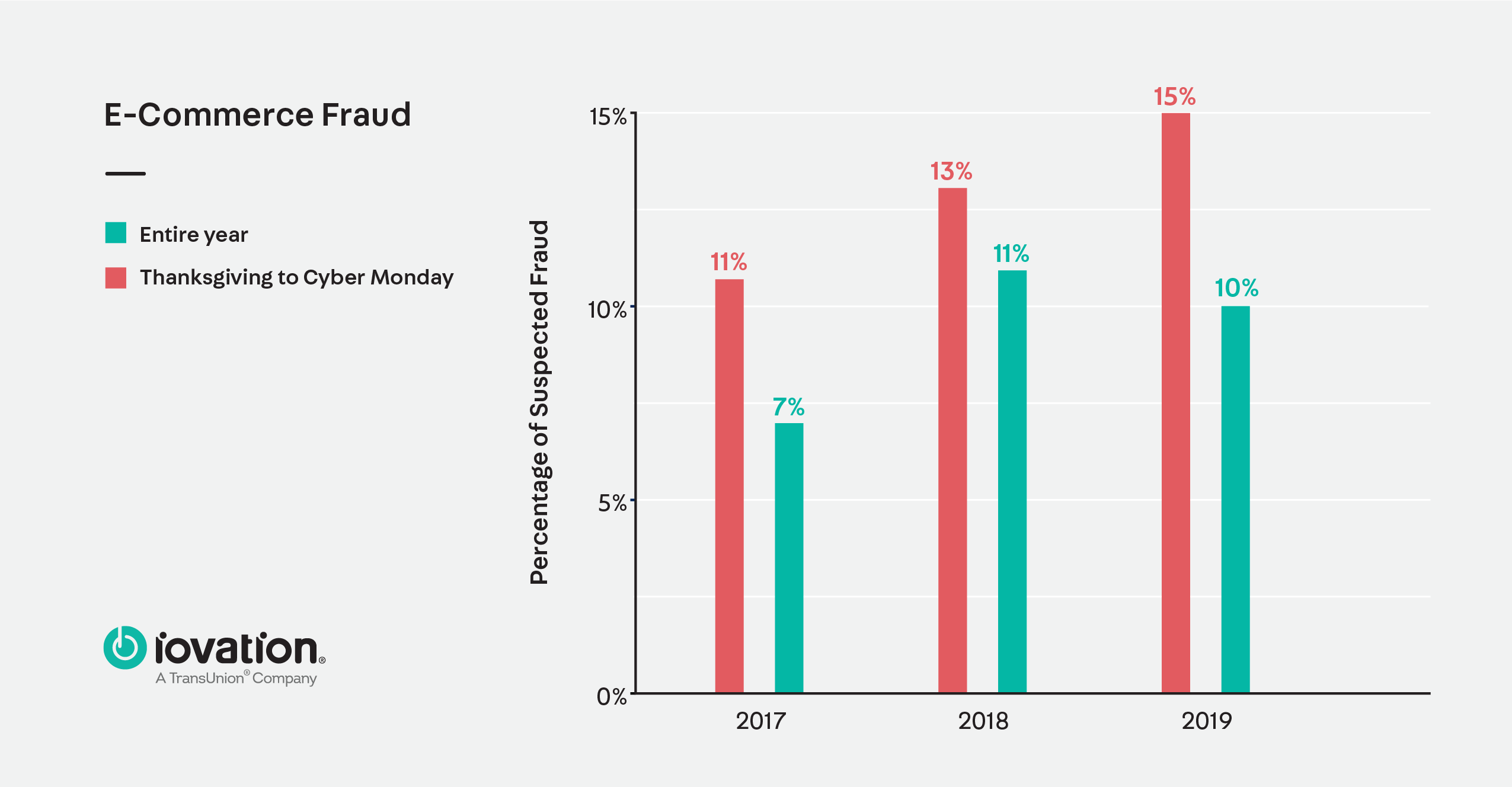